Welcome to the official web site of Wagon Band... 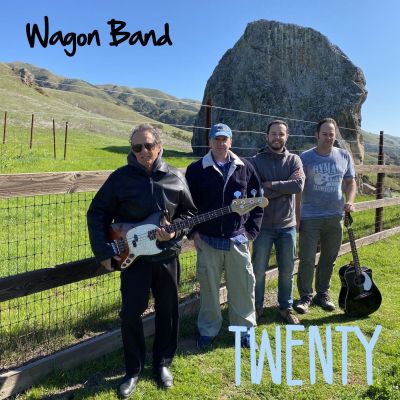 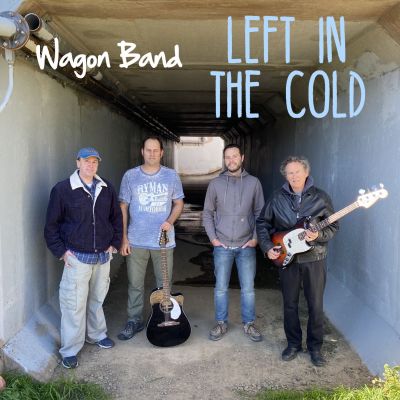 Wagon Band is pleased to announce that our brand-new seventh studio album is going to be released in the summer of 2020. Wagon Band's previous album entitled "The End" was released nearly five years ago on August 17, 2015. The new album is being produced by John Rewind and Lowell Hall. It includes songs that have been written (or co-written) by Charlie Galletta, John Rewind, Lowell Hall, and Steve Hall. As with past albums, the new material is a blend of country, pop, and rock. The new album is entitled "Twenty", with a nod to this being the 20th year anniversary of the band's existence and the year of release being 2020. "Twenty" features 12 original songs including 10 with vocals and 2 instrumentals, running approximately 45 minutes in length. As with Wagon Band's previous six albums, "Twenty" will be available at digital music retailers (such as iTunes, Amazon Music, and Google Play) and streaming sites (such as Spotify, Apple Music, and YouTube) worldwide. Physical CDs will also be available locally and by mail order. Photography for the new album and lead single artwork was taken at Big Rock, Lucas Valley, California. The lead single "Left in the Cold" was released worldwide during the week of March 2, 2020.  Also, for those who are not aware, Deluxe Editions of most of our albums have now been released to digital music retailers and streaming sites featuring bonus tracks, demos, live versions, alternate versions, and more.

Single title: "Left in the Cold"

Work on the new album began on April 9, 2018, when Steve forwarded fourteen of his unreleased demos to Lowell for recording consideration. In Steve's notations, he added: "Demo 4 (Left in the Cold). Very fast-paced verse chords and chorus chords. Probably should record this just to have such a fast-paced song. Most of mine are slow or mid-tempo." Lowell listened to the demo and replied: "So far my favorite, sounds like a lost Oasis track. Upbeat and uptempo which is something we need. Mark this one down!" And with that, we began recording "Left in the Cold" to start off our seventh album era. The song "Left in the Cold" was a demo that Steve had first written and recorded on April 20, 2007. The original demo has the title, related lyrics, and verse and chorus chords. For some unknown reason Wagon Band did not end up recording it for our fifth album and thus it became a forgotten lost track. For his production, Lowell kept the song all electric and wrote a pre-chorus and return/walk down part that added a lot. Lowell also wrote a very fitting guitar solo as well as other lead parts that filled out the song. Charlie next wrote and perfected a vocal melody, and then came in and recorded strong lead vocals that kept up the high energy. The finished version of "Left in the Cold" is a 3-minute all-out rock song. The lyrics describe what it is like to start to fall in love with someone but be unsure if they feel the same way back. You might hope and think that they like you, but you just don't know for sure. Have you developed all of these feelings just to get left in the cold? The song explores that possibility. Because Steve started writing the demo and title back when he was still single, he was able to nicely capture this interesting subject in a song. The first two lines are: "I'm trying real hard to read your clues. But your mixed signals leave me confused."  As with all Wagon Band songs, "Left in the Cold" has been registered with the U.S. Copyright Office. 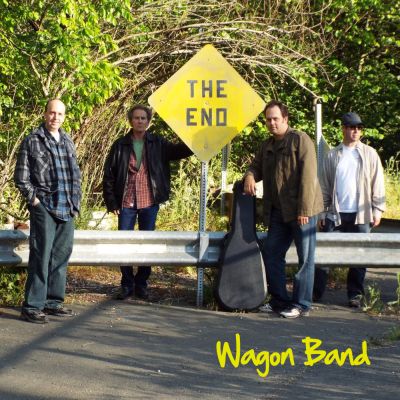 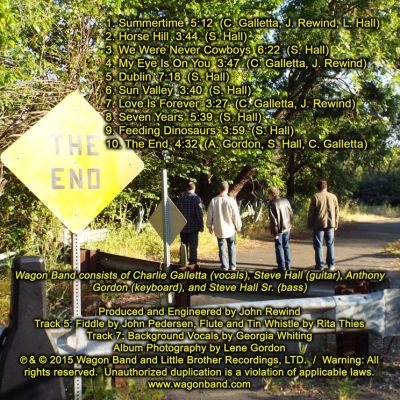 Wagon Band is happy to announce the official release of our brand new 6th studio album entitled "The End" on August 17, 2015.  The brand new album contains ten songs written during the period of 2011-2015.  The official cover art for the new album can now be viewed at the top.  The left side image shows the front cover and the right side image shows the back cover which is part of the physical CD release.  The back cover contains information about album songwriting, track length, and production credits.  Below, Wagon Band members Charlie Galletta, Anthony Gordon, and Steve A. Hall share some insights into the ten album tracks on "The End".

Charlie - "An all-around uplifting, feel-good song with a mid-section to get people moving.  Within the song, I make reference to 3 of my favorite albums.  They are Spring Session M by Missing Persons, Larger Than Life by Jody Watley, and Heaven On Earth by Belinda Carlisle."

Anthony - "This song is a simple, catchy, sing-along-while-you're-riding-down-the-road-on-a-road-trip song. It makes no pretense of being a worthy lyrical or musical contribution. It's just a fun rock song."

Steve - "The moment that Charlie wrote this song three years ago, I knew it was meant to be a lead-off single.  It's just a great commercial song and a perfect way to start the album to let the world know we are back after a seven year absence."

Charlie - "The pronounced keyboard accompaniment brings a classic feel to this song."

Steve - "This is the only song on the album which has actually been released by us before.  We recorded it four years ago and put it out on iTunes as a standalone single.  However, we never put it on an album and I wanted to record an improved version.  So we went back into the studio, started it from scratch, revised some lyrics, added some guitar solo parts, and now I feel that we have a much more definitive version."

WE WERE NEVER COWBOYS

Anthony - "One of the best songs on the album. The lyrics can come across as a simple western, cowboy song. But the words are filled with greater meaning. The lyrics apply to us as a band, but they also apply in a more general way to each of us as individuals, and -- no doubt -- to everyone."

Steve - "My sister Annie pushed me to finish writing this song.  Thus, I took a concept and song title and turned it into an actual song during a plane flight to Hawaii.  Those who have heard the song have said that it is one of the best songs which I have ever written.  And, really, that's the elusive dream that songwriters are always chasing -- writing their best lifetime song."

MY EYE IS ON YOU

Charlie - "I wrote a play on words for the chorus. Rewind's production makes this song very strong."

Anthony - "Perhaps the most radio-friendly song on the album. It's simple, catchy, and it has an electronica sound which adds to the eclectic mix of sounds in the repertoire of Wagonband."

Steve - "This song has so much energy to it.  It fits perfectly into the album as track four and has what I consider to be the best bass line ever heard in a Wagon Band song.  I consider this to be a mixture of pop, techno, and psychedelia."

Charlie - "Excellent instrumentation makes this song true to it's title. Listening to it takes you to another place. A unique song that worked out excellent."

Anthony - "It's a pretty song that brings back memories of Ireland. The lyrics are very varied, and they give the listener a verbal tour of this beautiful island."

Steve - "I wrote the original draft lyrics to this song on a plane flight from Dublin to Athens last summer.  In my mind, I could already hear the finished product as I wrote it.  And it turned out better than I could have imagined with the beautiful sound of the Irish instruments.  This is my personal favorite track on the album because Ireland means so much to me."

Charlie - "A down to earth good ol' country tune. Love it!"

Anthony - "This song, in a way, is a culmination of the "family" series of songs ("Go Fish", "Won't Be Far Behind", etc.). The lyrics help the listener to see themselves doing the things described in the song."

Steve - "When I wrote the music to the track "The End", I had some leftover music which was beautiful but just didn't fit into that song.  That became the framework for this song, which I wrote about my early childhood growing up on 5th Avenue in San Rafael, California."

Charlie - "I used 3 song titles from our 1st 3 albums to form the chorus (Cry on me 1st album, the Test of time 2nd album and Don't Be Down 3rd album). Fitting, I thought, for this album. I wanted the message of Love Is Forever to be strong and so I make reference to 2 scriptures."

Anthony - "In this song, the listener hears the phrases "Don't Be Down", "The Test of Time", and "Cry On Me" -- some of Wagonband's greatest hits. This  song is an homage to all of those hits. This song complements "The End". This song is a trip down Wagonband memory lane."

Steve - "Charlie and Anthony gave away spoilers to reveal the surprises found within the song, so I'll talk about the music.  The chords are simply awesome and we considered opening the album with this song.  Definitely one of my favorite album tracks."

Charlie - "Beautiful. Encompasses what many men can say to their own wife. Nice light guitar work."

Anthony - "A straight-ahead love song dedicated to the woman who has been the songwriter's wife of seven years. In the song, the songwriter expresses appreciation for his wife's loyalty, supportiveness and beauty."

Charlie - "This song is catchy to me. I sang it wrong at first. But with Steve's coaching I got it right and it's very catchy."

Anthony - "This is a song is about the songwriter's own son, so it takes on a special significance. This straight-ahead rock song is sweet and playful without being overly sentimental or sounding like a children's song."

Steve - "Did you really think I could possibly release a new Wagon Band album and not include a song about some of the special moments that I've enjoyed while watching my dear son grow up during the past three years?"

Charlie - "The musical variations through this song keep you entertained throughout this song. It's beautiful in my opinion. The words are poetic but true to life . The combination of the very diverse lyrics and melody and music created a beautiful song that I'll never get tired of listening to. The ending has a nice blend of bass, guitar and keyboards."

Anthony - "An epic, bittersweet salute to Wagonband and the years its members spent together creating music. This song is poetic without seeming out of place in a rock song. It encapsulates all of the band members' memories and history in an enjoyable song."

Steve - "If this is really the end for Wagon Band, then we ended on a high note with one of our best-ever songs.  Writing the music for this song was an incredibly tough task that continued deep into the recording of the track in the studio.  But we did it.  We got it just right." 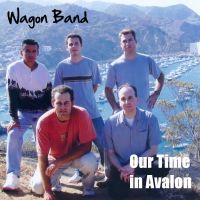 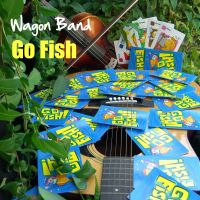 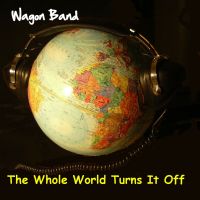